Freeburn Law Teams Up with A.B.A.T.E. to Promote Annual Ride For Smiles 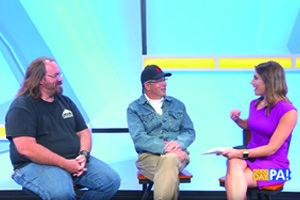 Freeburn Law is proud to have teamed up with the Blue Mountain Chapter of the Alliance of Bikers Aimed Toward Education (A.B.A.T.E.) of PA, for its Third Annual Ride for Smiles. A.B.A.T.E. of Pennsylvania is a non-profit organization made up of motorcycle enthusiasts who are dedicated to protecting the rights of motorcyclists through political change, public education, and other charitable works.

Attorney Richard Freeburn of Freeburn Law and Adam Gill of A.B.A.T.E. Pennsylvania were featured on ABC’s Good Day PA on Monday, August 26th to discuss the upcoming event. The segment appears below:

The ride, scheduled for Saturday, August 31, 2019 benefits Caitlin’s Smiles, a non-profit founded in the memory of 7-year-old Caitlin Hornung who sadly lost her battle with cancer in 2000. The organization provides hospital patients with “Bags of Smiles,” care packages, which incorporate various things such as coloring books, to promote activities including creative writing, sculpting, and drawing. The overarching desire is to provide these children with an outlet for creativity and the means for increasing their self-worth.

Ride registration, located at the office of Cailtin’s Smiles, 3303 North 6th Street, Harrisburg, PA, begins at 10:00am and lasts until 12:00pm when the ride commences. The cost is $20 for each rider and $15 per passenger. Individuals are to ride at their own pace, poker run style, with the first stop at Yamaha of Camp Hill, the second stop at Appalachian Harley Davidson, the third stop at Motorvation, and the last stop at Kristy’s Whistle Stop. The first 25 riders to register will receive a free T-shirt.

Freeburn’s passion for teaming up with A.B.A.T.E. stems from his experience as a personal injury attorney. “I’ve been practicing law for forty years. And over those forty years, I’ve represented a lot of injured motorcyclists and sometimes motorcyclists who are killed. And it’s an issue that’s really important to us,” says Freeburn. Though he emphasizes the importance of contacting an attorney when you have been injured in an accident, he also maintains a greater desire to hear nothing from them. “…The best would be to not have calls because you know to stay safe.”

If you have any questions about the ride, feel free to contact Bob LeGore at osal@abatepa.org or 717-870-7604.