What Happens When You’re Hit by a Car? 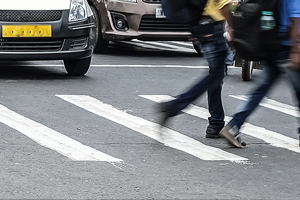 One of the biggest fears for any driver is hitting someone while they’re walking. That being said, if you’re a pedestrian, the fear of getting hit by a car is much worse. The mass of a vehicle extremely outweighs any pedestrian, ensuring you won’t walk away unscathed. A driver at 30mph can do serious harm to a pedestrian walking, but so could a car moving at 10mph.

With the chaos that ensues from an accident, a lawsuit may be one of the least of your worries, but it is important to keep all legal action an option, especially if you’ve been hit by a car.

Whose Fault Is It?

The fault is most likely to go toward the party that displayed any signs of negligence. If the driver runs a red light, disregards a stop sign or is traveling at excessive speeds, they will primarily be considered as the negligent party. However, there are ways that the pedestrian can be careless as well. If the pedestrian wasn’t paying attention and decided to cross the road in an illegal area, they could be identified as the negligent party.

Other states follow a “comparative fault” rule. This means that a pedestrian can recover some damages even if he was partly at fault.

Damages in a Pedestrian Accident Case

In a personal injury lawsuit, the damages are meant to compensate for all injuries. Yes, money doesn’t equate to the injuries one has to endure, but that’s the best that can be done.

The simpler categories of injury damages are medical expenses and lost wages. All medical expenses that the pedestrian paid as a result of the accident can usually be reimbursed as part of the damages in the lawsuit. If work was missed due to the injuries or the treatments, the money lost from not being able to attend work is generally made up as well.

Loss of normal life or “loss of enjoyment” refers to the negative impact on the injured person’s life as a result of the accident. So, if an accident was to leave the pedestrian paralyzed, and that interferes with the normal way of life they once had these damages would be higher than if the injured person had spent little time outdoors and active before the accident.

Recovering from injuries is already hard enough without having to worry about the handling the legal action of your case. The professionals at Freeburn Law are incredibly well equipped to handle your case. If you are a pedestrian injured in a car accident don’t wait before it’s too late. Contact your personal injury attorneys today!