Why Aren’t Seat Belts Required on School Buses in PA? 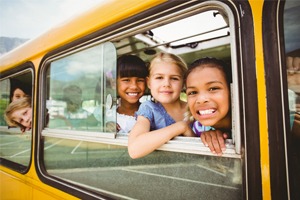 Over the summer, we sent our oldest daughter to summer camp and she rode on a school bus for the first time. She was so proud and happy to sit with her friends. We waved goodbye to her from the street as she was barely able to see out of the windows on the bus. My wife and I couldn’t help but question, “Is she really safe riding on the school bus?” “Why don’t they make the kids wear seat belts?”

This morning, I turned on the TV while eating breakfast with my wife and 2 daughters. Good Morning America was telling a story about a school bus crash in Ohio. They showed a video (shown below) that was taken from inside of the school bus as it was hit from the side by a car that failed to stop at a red light.  The driver who ran the red light was driving with a suspended license.

The video of the Ohio crash highlighted our concerns. There were 25 kids riding on the school bus and one driver. None of the kids were wearing a seat belt.  The driver was the only person on the bus wearing a seat belt.  As the bus was struck on its side, the bus spun and overturned.  All of the kids are seen flying around the interior of the bus.  When the bus finally stopped, the kids were pinned and stuck against the side and the roof of the bus.  Meanwhile, the bus driver remained seated and secured by his seat belt.

In Pennsylvania, Why Aren’t School Buses Required to Have Seat Belts?

Since 1968, laws have been enacted requiring that cars and light trucks be equipped with seat belts. According to the NHTSA, large school buses are designed differently than cars and light trucks. The exteriors of school buses are designed to be highly visible with bright colors, flashing lights and stop-sign arms.  Large school buses are also heavier and distribute less crash forces to their passengers. Their interior design protects passengers through a concept called “compartmentalization”. This means that the bus seats are strong and closely spaced. This design limits the distance a child moves during a crash. The seatbacks are also energy-absorbing.  They are high, wide and thick with padding. The seats bend forward if a child is thrown against it. “Compartmentalization” is intended to protect passengers without requiring seat belts.

However, while “compartmentalization” may protect children if the bus is involved in a head-on collision, does this design adequately protect children if the large bus is struck from the side or if the bus overturns? This danger is clearly shown in the Ohio crash video. Despite this danger, the NHTSA still claims, “Students are about 70 times more likely to get to school safely when taking a bus instead of a traveling car.”