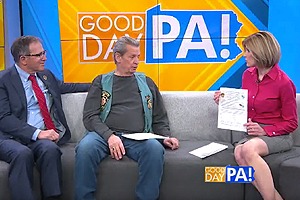 About the Blue Knights

The Blue Knights Motorcycle Club is an international organization of motorcycle riders with chapters throughout the United States and several other countries. The group strives to promote motorcycle safety—and frequently holds fundraising events to support the families of fallen officers. Membership is open to all active-duty and retired law-enforcement officers who ride. According to Dick Freeburn, the Blue Knights represent two groups—motorcycle riders and law-enforcement officers—Freeburn Law is proud to support.

Tom Taylor—current President of the Harrisburg, Pennsylvania Chapter of the Blue Knights Motorcycle Club—says the first priority of rider safety is “See and Be Seen.” He says drivers of motor vehicles need to be aware of riders—just as riders need to be aware of drivers. He adds that both safety lighting and exhaust noise help alert drivers to a motorcycle nearby.

On April 27th, the Harrisburg Chapter of the Blue Knights Motorcycle Club—in conjunction with the Pennsylvania State Police Museum—will hold the 15th Annual “Soldiers of the Law” Memorial Motorcycle Ride in Hershey, Pennsylvania. The event will honor law-enforcement officers in the state who have lost their lives in the line of duty. The 85-mile ride—complete with a police escort—will take riders through Dauphin, Lebanon, and Schuylkill counties. The event will feature the following:

While event-day registration is permitted, participants are encouraged to pre-register by no later than April 12th in order to receive a commemorative pin and optional event t-shirt.

When you call, you’ll speak with a leading Harrisburg motorcycle accident lawyer for FREE. Freeburn Law will fight hard to seek the justice and the compensation you deserve after an accident. Just call the 7’s for help at 717-777-7777 or 570-777-7777. There is no attorney’s fee due up front—and we only get paid after you do.