What You Should Know About Pennsylvania Bicycle Law 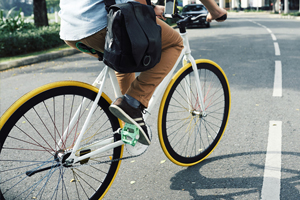 “Vehicle.”  Every device in, upon, or by which any person or property is or may be transported or drawn upon a highway, except devices used exclusively upon rails or tracks. The term does not include a self-propelled wheelchair or an electrical mobility device operated by and designed for the exclusive use of a person with a mobility-related disability.

“Pedalcycle.” A vehicle propelled solely by human-powered pedals or a pedalcycle with an electric assist.  The term does not mean a three-wheeled human-powered pedal-driven vehicle with a main driving wheel 20 inches in diameter or under and primarily designed for children six years of age or younger.

“Pedalcycle with electric assist.”  A vehicle weighing not more than 100 pounds with two or three wheels more than 11 inches in diameter, manufactured or assembled with an electric motor system, rated at not more than 750 watts, and equipped with operable pedals and capable of a speed not more than 20 miles per hour on a level surface when powered by the motor source only. The term does not include a device specifically designed for use by persons with disabilities.

“Official traffic-control devices.”  Signs, signals, markings and devices not inconsistent with this title placed or erected by authority of a public body or official having jurisdiction, for the purpose of regulating, warning or guiding traffic.

“Sidewalk.”  That portion of a street between curb lines, or the lateral lines of a roadway, and the adjacent property lines, intended for use by pedestrians

As a general rule, bicyclists riding on the roadway have all of the rights of operators of other types of vehicles on the roadway. However, bicyclists are also subject to all of the duties and responsibilities of operators of other types of vehicles.   This is a general rule, and is subject to special provisions in the law for bicyclists, and legal provisions which, by their nature, can have no application to bicyclists

Riding a Bicycle While Under the Influence. For example, a pedalcycle is defined as a vehicle propelled solely by human-powered pedals. A bicycle is a “vehicle” for purposes of prosecution for driving under the influence of alcohol or controlled substances. Bilka v. DOT, Bureau of Driver Licensing, 92 A.3d 1253 (2013).

General Rule: Bicycles, like other vehicles must be ridden on the right side of the roadway, subject to specific exceptions.

Proceeding at Less Than Normal Speed. Any bicycle riding on a roadway at less than the normal speed of traffic must ride in the right lane available for traffic, or as close as practicable to the right-hand curb or edge of the roadway, except when overtaking and passing another vehicle proceeding in the same direction or when preparing for a left turn at an intersection or into an alley, private road, or driveway.

This rule does not apply to a bicycle using any portion of an available roadway due to unsafe surface conditions; or,

A bicycle using a roadway that has a width of not more than one lane of traffic in each direction.

Bicycle Steer Clear Law: A motor vehicle that passes a bicycle traveling in the same direction must pass to the left of the bicycle, and must give the bicycle a minimum of four (4) feet of space.

The driver of a motor vehicle who passes a bicycle must pass at a careful and prudent reduced speed.

General limitation on passing on the left: Vehicles may not cross the center of the roadway when passing a vehicle proceeding in the same direction unless the left side is clearly visible and free of oncoming traffic for a sufficient distance to pass and return to their lane before coming within 200 feet of oncoming vehicles, and without interfering with the operation of oncoming vehicles or the vehicle being overtaken.

The driver of a motor vehicle shall not, when turning, interfere with a bicyclist proceeding straight in accordance with the rules relating to the operation of bicycles.

Bicycle riders must ride astride a permanent and regular seat attached to the bicycle.

Bicycles may not be used to carry more persons than the bicycle is designed and equipped to carry.

An adult bicycle rider may transport a child in a bicycle child carrier that is securely attached to the bicycle or in a trailer that is towed by the bicycle.

Front Lamp:  Bicycles ridden between sunset and sunrise must be equipped with a lamp that emits a beam of white light intended to illuminate the bicyclist’s path and visible from a distance of 500 feet to the front.

Rear Reflector:  Bicycles ridden between sunset and sunrise must be equipped with a red reflector facing to the rear that is visible at least 500 feet to the rear.

Side Reflector:  Bicycles ridden between sunset and sunrise must be equipped with an amber reflector on each side.

Lamps and Reflectors Worn by the Bicyclist:  A lamp or lamps worn by the bicyclist shall comply with the requirements of the law if they can be seen at the specified distances.

Audible Signal Devices:  A bicycle may be equipped with a device that can emit an audible signal a distance of 100 feet.

Sirens:  Bicycles are not permitted to be equipped with any siren.

Brakes:  Every bicycle shall be equipped with a braking system that will stop the bicycle in 15 feet from an initial speed of 15 miles per hour on a dry, level and clean pavement.

Bicyclists may not carry packages, bundles or articles, that prevent the driver from keeping at least one hand on the handlebars.

Pennsylvania law generally requires bicycle riders and bicycle passengers under the age of 12 to wear a bicycle helmet that meets the required standards contained in the Pennsylvania Vehicle Code.

“Wearing a helmet” means having a helmet of good fit fastened securely upon the head with helmet straps.

Helmets are generally not required under Pennsylvania law for persons riding in a restraining seat attached to a bicycle or in a trailer towed by a bicycle.

It is illegal for anyone to sell or offer for sale a bicycle helmet that does not meet the standards of the American National Standards Institute, the American Society for Testing and Materials, the Snell Memorial Foundation’s Standards for Protective Headgear for Use in Bicycling or any other national recognized standard for bicycle helmet approval.

Violation of the law is punishable by a fine of not more than $25.00, including all penalties, assessments and court costs.

A charge of violating the bicycle helmet law must be dismissed if, before the hearing on the charges, the person charged shows that they obtained a helmet that meets the required standards.

The bicycle helmet law does not apply to children under the age of 12 if they can produce a statement from the family’s church authorities attesting that it is against the tenets of the family’s religion to wear a helmet.

When riding on sidewalks or bike paths that are also used by pedestrians, the bicyclists must yield the right-of-way to pedestrians.

Bicyclists must give an audible signal to pedestrians before passing them on a sidewalk or bike path.

Bicycles may not be ridden on the sidewalk in a business district unless permitted by official traffic control devices, nor when a usable bicycle only lane has been provided adjacent to the sidewalk.

General Rule: Except as set forth below, bicycles parked anywhere on a highway must adhere to the provisions of the Pennsylvania Vehicle Code relating to stopping, standing and parking.

On a Sidewalk: A person may park a bicycle on a sidewalk unless prohibited by an official traffic control device. However, a bicycle parked on a sidewalk may not interfere with the normal and reasonable movement of pedestrians or other traffic.

A person must be at least 16 years of age to operate a bicycle with an electric assist.

A bicycle with electric assist is defined in the Section 102 of the Pennsylvania Vehicle Code as a vehicle weighing less than 100 pounds with 2 or 3 wheels more than 11 inches in diameter, manufactured or assembled with an electric motor system rated 750 watts or less and equipped with operable pedals and capable of a speed of not more than 20 miles per hour on a level suface when powered by the motor source only. The term does not include devices specifically designed for people with disabilities.

The information provided in this article represents general principles of law and is not specific legal advice from an attorney to you. No attorney-client relationship is created by providing the information contained in this article. You should never base a legal decision, to act or not act, on general information such as the information provided in this article. Proper legal advice requires close attention to detailed facts and thorough knowledge of all facts important to forming a judgment on the matter being considered. Before taking action on any legal issue, you are urged to hire an attorney by reaching a formal agreement with the attorney to advise and represent you. We invite you to get in touch with us and see if we can help you. For your FREE consultation, call Freeburn Law at the 7’s. Call 717-777-7777. Keep in mind, contacting us does not create an attorney-client relationship.